You’re probably already following your favorite celebrities and bloggers on Facebook, Instagram, and Twitter. Everyone does it, and that’s where most of the updates about what they do and what they like seem to come from. But, let’s face it, that is so 2014…

The new craze is Snapchat, a place where you can follow your celebrities, favorite bloggers, and even politicians, to get an almost instant update on what they do. Launched in 2011, Snapchat took the online world by storm, reaching almost 60 million users in just four years. Dubbed my many social media experts as an app of forgetting, Snapchat is the perfect tool to share ephemeral images to anyone who follows you. Basically, you share snippets to many other people instantly. What makes Snapchat so special is the fact that it has a minimal “paper trail” effect – images get deleted automatically after a certain period of time.

Snapchat evolved into a powerful source of public content, life events, music, and sports updates, as well as private messaging. The app is also a powerful online avenue where popular bloggers, celebrities, journalists, athletes, and any other famous person can communicate with millions of followers. Although recent numbers show that Snapchat users prefer the private messaging feature more, the public news, brand features, and celebrity content are on a steady rise. Figures show that 25 percent of Snapchat users accessed all areas equally, and 70 percent know about the brand and celebrity content and have a favorable opinion of these features. Snapchat is a vital tool for many social influencer platforms as fans are able to keep up with their daily updates.

The new social network’s features and reach have attracted thousands of bloggers, celebs, and other influential personalities. Let’s take a look at a few of them and how they engage their followers:

Also known as Shonduras to his millions of followers, he was the first real Snapchat celebrity. He is one of the few to make it big on the app right from the beginning, attracting thousands of followers back in 2012. Shaun is still as creative as ever, and his pictures attract hundreds of new followers every day. He is famous for working with a lot of established brands and traveling the world as an important brand influencer.

Chrissy was already a big sensation on Facebook, Twitter, and Instagram before breaking into Snapchat in 2014. In little over a year, she was able to attract a huge following — more than 300,000 fans now watch her every move on the app. She posts exciting moments from every day, from snaps of her husband John Legend’s singing to new recipes and gorgeous selfies.

You can find Chrissy at chrissyteigen

Hip hop’s bling is nowhere near as exciting as it is on Snapchat, and the big boys of the industry know it. The recurrent themes in Rick Ross’ photos suggest a lifestyle of luxury: popping champagne bottles, dancing to hip hop beats in the back of luxury cars, pool parties and expensive clothing. It’s possibly the most lavish Snapchat account ever.

John Mayer is one of the few celebrities that you should follow on Snapchat for something other than photos. His short snap stories are simply amazing and will leave you only wanting more. The fun thing about John is how weird and bizarre he is, with stories involving everything from Nerf guns and background solo plays, to joking with his therapist and cliff climbing.

Although John Boyega is a rising star who is well-known for his starring role in the latest Star Wars movie franchise, his Snapchat life is surprisingly down to earth, especially when you compare it to other actors of similar prominence. His Snapchat videos are entertaining and funny, and most importantly, they’re relatable. For instance, his posts include videos about learning how to sing or about someone who once tried to sell him an $85,000 chair.

Michael Platco is arguably the best storyteller on Snapchat. His famous mock weather report after a huge snow storm was phenomenally funny and attracted tens of thousands of views. His inventive, albeit silly stories, attract a huge following every day, but it was his finger drawings that brought him instant success and the “Van Gogh of Snapchat” nickname.

Serena’s updates are at serenaunmatched

Actor and musician Jared Leto has hundreds of thousands of Snapchat followers and is one of the most exciting celebrity to follow. Jared is a keen lover of travel, hiking, and nature, so you can expect daily stories and images from his wild outdoor activities.

You can see what Jared’s been up to at jaredleto 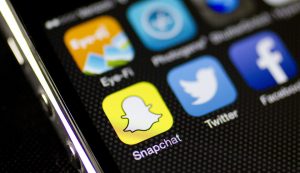 You may know Justin as the man behind justin.tv and twitch.tv — both huge developments in the world of the influencer — but he is a Snapchat celebrity, as well. He tried to broadcast every moment of his life on justin.tv, and it seems his doing it all over again on Snapchat. What’s more, he is looking for a Snap God — someone to document his life 24/7 on the app and continue to expand his influence.

You can find Justin Kan at justinkan

Arnie’s Snapchat account is only a year old, but he already has a following in the millions. He travels a lot, he meets important people, has an incredibly awesome life and he posts daily – could you ask for more?

Some of these influencers had established personalities before the world of social media and Snapchat, but many of them are self-made social media personalities. What they all have in common is how they gathered their following — by posting entertaining and relevant content that spoke to the interests of their followers, and continuing to engage with them through various social media platforms like Snapchat to foster a ubiquitous presence in today’s internet.

Affiliate marketing has exploded over the past few years. Sites that have been around for decades are also pulling in sales from affiliate links. Affiliate […]

The cloud has become an increasingly popular option for businesses of all sizes. For iSeries users, there are many reasons to consider moving to the […]

The main draw to mobile phones which gets all the attention are the vast range of features newer phones are able to offer. These options […]